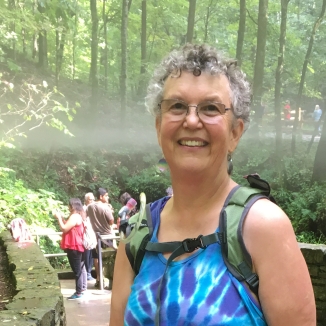 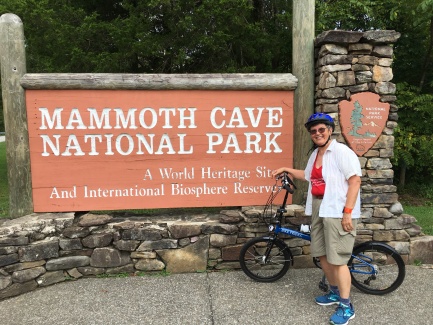 This park – and others in TN and NC- are always free, per an arrangement with the farmers whose land was bought when the National Parks were created.  The Caves were already tourist destinations; I road a lovely 18 mile former rail road route from the Campground to Park City. YES!

I took the 2 mile “Historic Cave Walk” which was fascinating and a cool 55′.  Steam clouded my glasses as I emerged back to the humid 88′ above.  We were guided through tunnels and large caverns naturally created in limestone laid down some 330-350 MILLION years ago when this was an ocean floor. We ended where the route climbs about 5+ flights up “the tower”.   I don’t like ladders or fire towers or high bridges with grids; I looked up for 5 flights then recognized I was essentially at the top of a fire tower like stairway!!!! Just in time the “tower” used a rock landing, which restored my calm; I did not look down or up though the engineering feat was, I’m sure, impressive.

My Mammoth NP Memory will be the comment of our underground guide, “the first tour guides were ACTUALLY black slaves.”   Something in that ‘actually’ struck me as terribly racist and wrong. It is like saying, “the preacher was ACTUALLY a woman”.  It suggests that the believable thing would be white and male.  I am thinking it would be best said without the ACTUALLY. The truth is, white owners sent their slaves into the caves and the slaves, who were Black Americans, became the trusted guides. That white slave owners ACTUALLY TRUSTED these slaves to get them safely in and out of the caves may be ACTUALLY the real wonder.

We were reminded that tourism flourished during the civil war, when the ground above was deeply divided.  When the South held the area, Confederate Soldiers enjoyed the cool; when the North held the ground above, the Union soldiers came in.  Any soldier, wearing sticky, insect riddled clothing, would have found cool wonder and rest in these dark and ancient caves.